The Kingdom of Jordan View Basket

Discover the history and sheer beauty of this desert nation 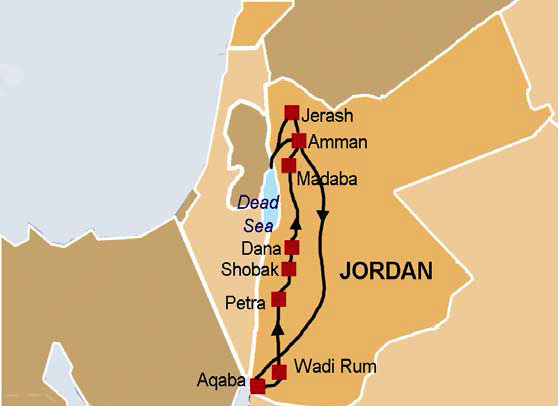 Jordan has fascinated visitors for centuries with its stunning desert landscapes, a plethora of ancient towns and amazing World Heritage sites. It is comfortable, safe and welcoming and is one of the region’s most rewarding destinations.

The local culture of hospitality stems from the country’s deep roots in its Bedouin history. Although modern day Jordan is a relatively new country compared to its larger neighbours, the region has been traversed by camel caravans and Nabataean traders plying the legendary King’s Highway for centuries whilst Roman legions, Muslim armies and the Crusaders have all swept through this ancient land on their journeys of conquest.

Although largely desert, Jordan has lush farming lands, dramatic mountains and beautiful beaches. Crusader castles and ancient churches dot the countryside and there are the enduring sites of Wadi Rum, the Dead Sea and the jewel in the crown of the country’s many antiquities, wonderful Petra, the ancient Nabataean city carved into the pink sandstone cliffs in Jordan’s southwestern desert.

Steve Mortimer heads up Byroads Travel and will be your host on this tour. Steve has more than 30 years in the travel industry and has travelled to well over 120 countries. He has worked with a number of well‐known Australian and UK adventure travel companies including 13 years as a Product Manager and Operations Director for Peregrine Adventures. In addition to researching and developing holidays in many different regions of the world Steve has led a great number of trips to some of the world’s most interesting, exotic and out of the way places.

Steve likes nothing better than getting out and about with like-minded travellers, sharing his knowledge and introducing them to some of the world’s most interesting places.

With Byroads, you can be confident that your itinerary includes visits to all the ‘must see’ attractions – and much more, however there are some days when you’ll have time to wander and to make some of your own discoveries. Throughout the tour local guides are employed to provide a wealth of background information and share their extensive local knowledge.

People who ordered The Kingdom of Jordan also ordered the free travel brochures below. Click on the images to find out more about these brochures.